Dusan Tadic announced as Played of the Month

Dusan Tadic has been announced as Player of the Month by the Eredivisie. The striker from Ajax was statistically the best performing player in March. Willem II-striker Alexander Isak took the prize for Talent of the Month.

Dusan Tadic scored his twentieth goal against PSV in the Eredivisie. After Arek Milik in 2015/16, the 30 year old Serbian is the second Ajax player this decade involved in at least 28 goals in one season (20 goals and 8 assists).

In the four rounds in March, Tadic has been a striker of the first order. The club top scorer made a shot at goal eight times, five of which were on target (4 goals) and three of which were blocked by an opponent. The last time, in the Eredivisie, that Tadic sent a shot over or next to the goalmouth was on 20 January against sc Heerenveen (4-4).

Dusan Tadic was awarded the trophy on Friday by FOX Sports reporter Hans Kraaij jr. It is the fifth time that a player from Ajax has won the prize. Previously, Hakim Ziyech (October), Nicolás Tagliafico (November) and Frenkie de Jong (December and February) have been awarded the title of Player of the Month. 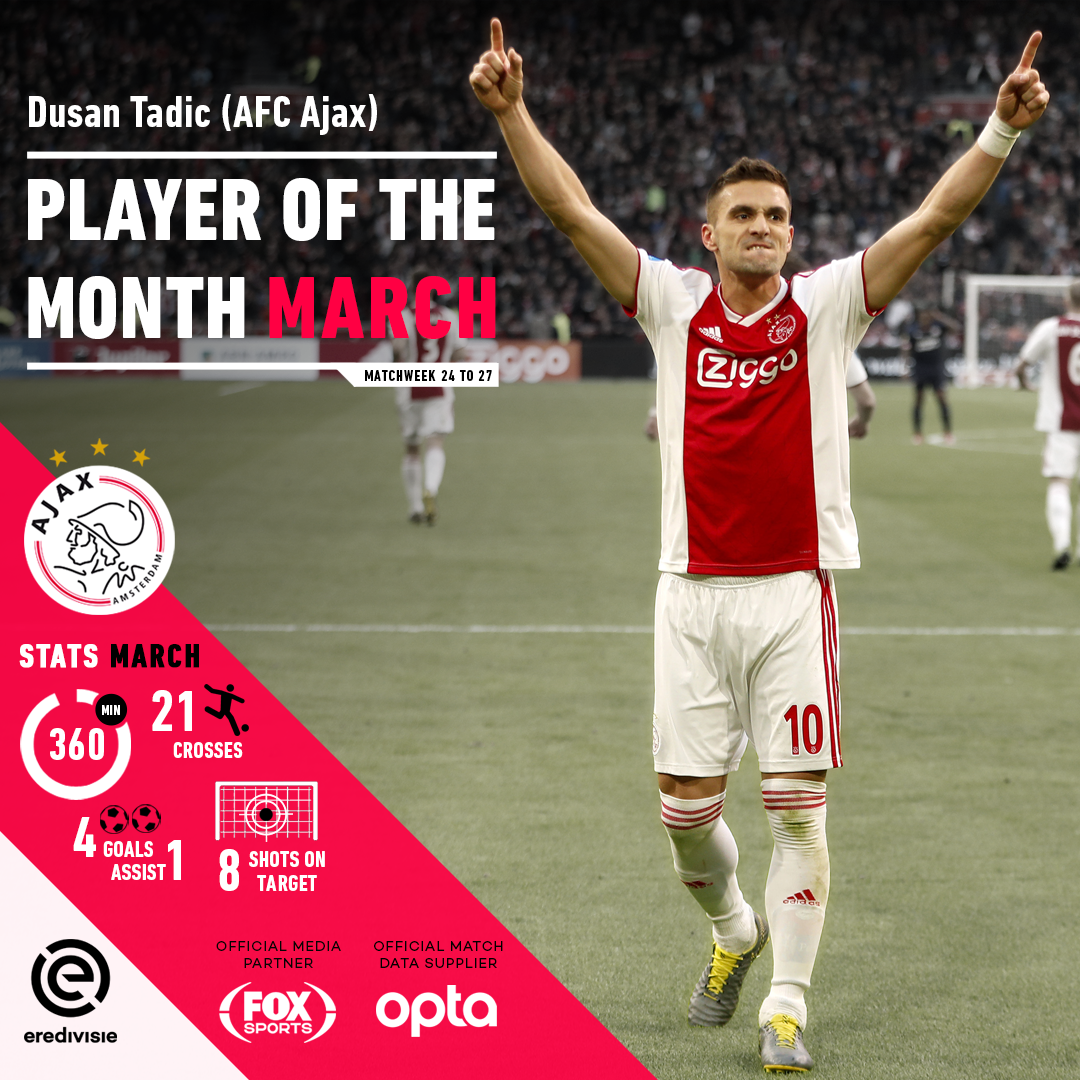 Alexander Isak Talent of the Month

Willem II striker Alexander Isak is announced as Talent of the Month. The 19 year old player, on loan from Borussia Dortmund, made history on Saturday as the first player ever to capitalise on three penalty kicks in one Eredivisie duel and the youngest Willem II player to score a hat-trick.

In March, the Swedish international scored seven times and provided one assist. Isak made a shot at goal seven times and had 34 touches of the ball in the opponent's sixteen metre area.  Isak was awarded the prize for Talent of the Month on Thursday by FOX Sports reporter Maarten van Os. 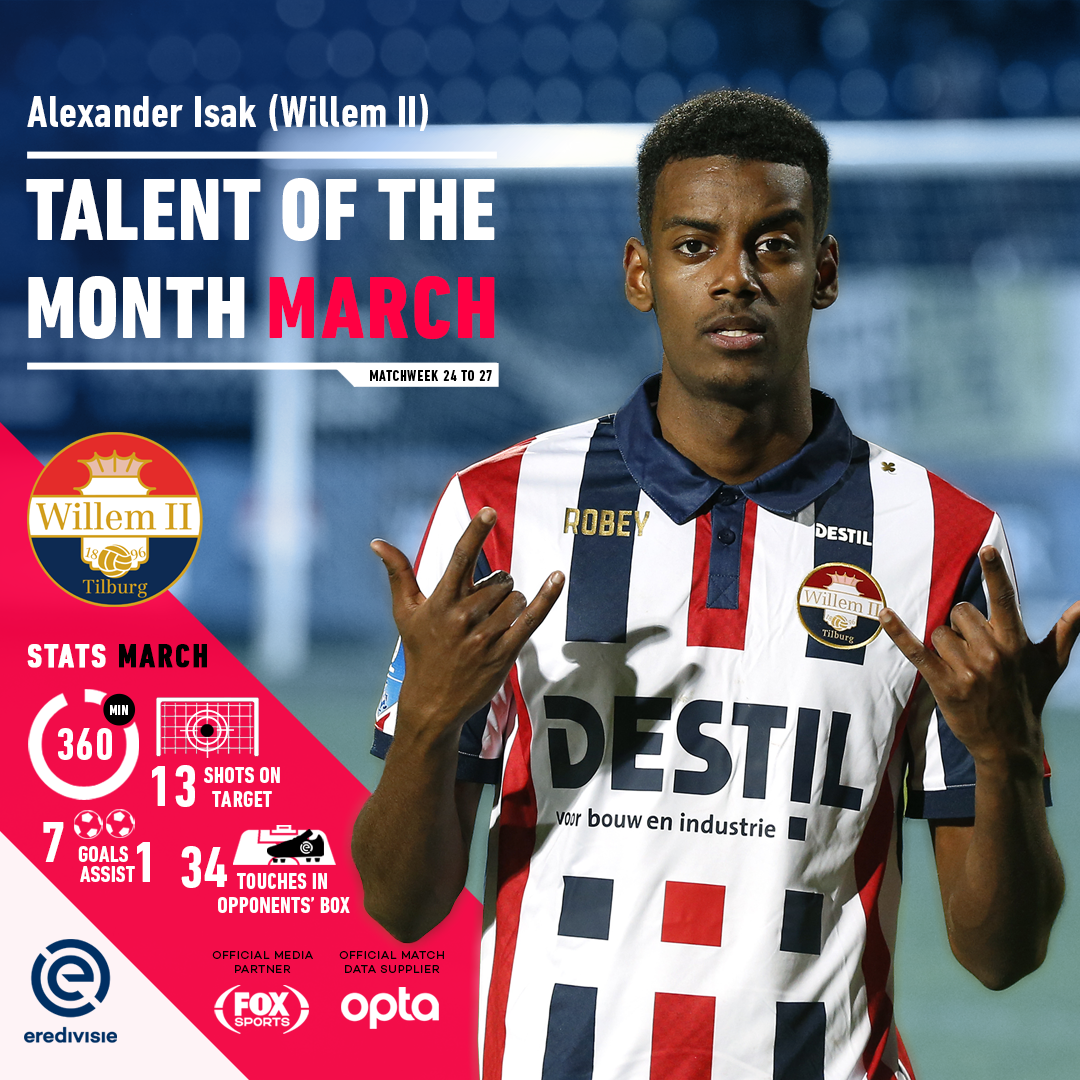 PEC Zwolle provides most players for Team of the Month

In the Team of the Month category in March, based on individual player statistics, PEC Zwolle was the team which provided most players. With Younes Namli, Darryl Lachman and Mickey van der Hart, the Overijssel based club provided three players. It is notable that there wasn't a single PSV player in the team for the first time this season. 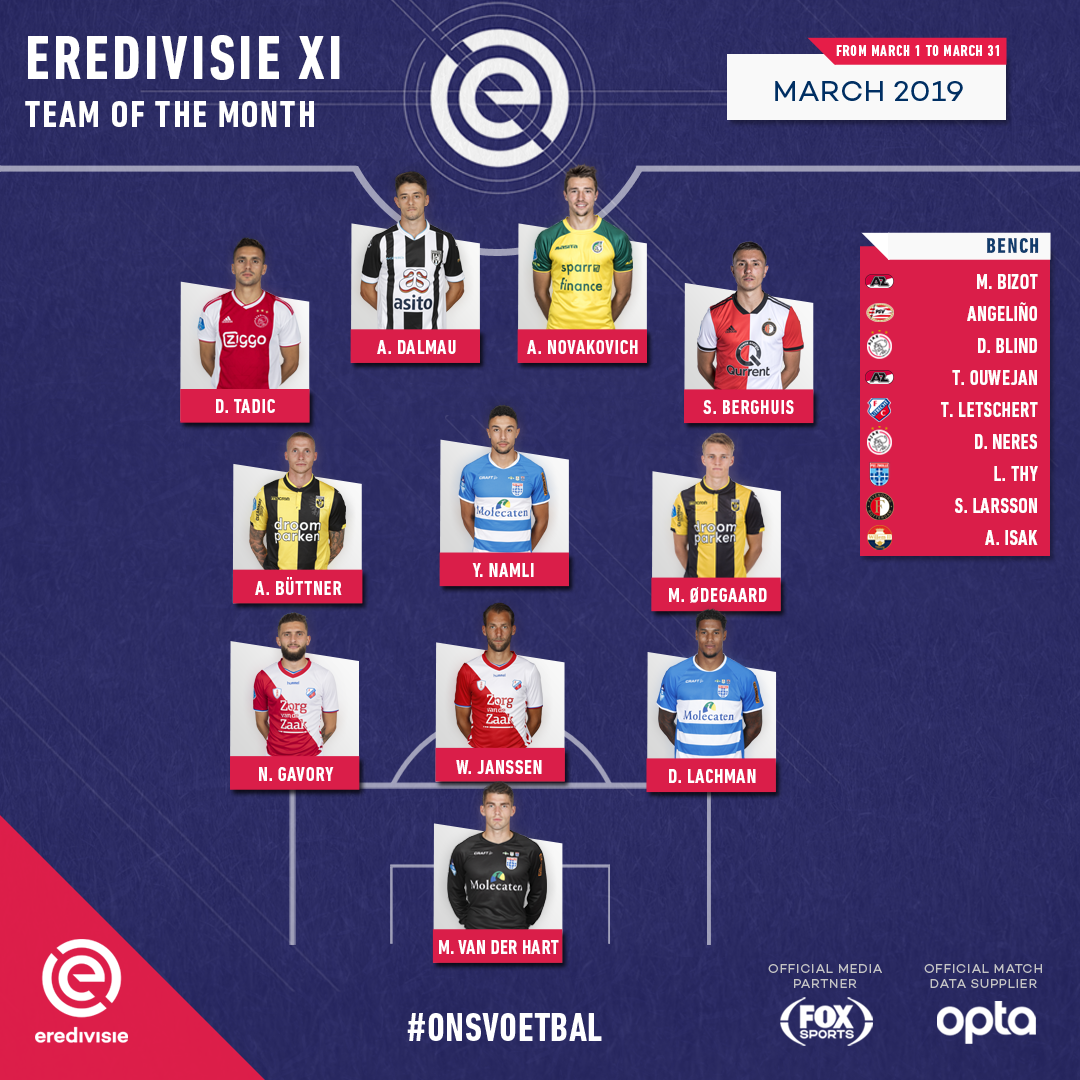 The prize for Player of the Month has been introduced this season and is an initiative from the Eredivisie CV in collaboration with FOX Sports and Opta Sports. The winner is determined on the basis of dozens of statistics. To be considered for a prize or a nomination in the team, a player must have played for at least two-thirds of the overall playing minutes. All players who were born on or before 01 January 1997 are eligible for the talent prize.