The Eredivisie is looking for the #OneToWatch players together with ESPN and Gillette. In addition to football fans, (former) players and influencers, we asked the same question to the data specialists at SciSports. Below are the top 10 of the data specialists.

"With the Eredivisie 2021/22 season full of excitement and anticipation, it is difficult to know where we should look first. Ajax Amsterdam will be looking to retain their place at the top of the pile while PSV Eindhoven and others look to narrow the gap in a competitive campaign. Like most years in the Eredivisie, plenty of exciting talents will be hoping to prove their worth for a whole host of reasons.

Qualifying for the UEFA Champions League, Europa League, Conference League and remaining in the Dutch top flight means that there are incentives for all teams – not to mention the return of fans back to stadiums which will add more fuel to the fire.

In this post, we use data-driven insights to identify and analyse 10 exciting Ones to Watch in the 2021/22 Eredivisie campaign."

"With Lutsharel Geertruida recovering from a long-term knee injury, Marcus Holmgren Pedersen is expected to be first-choice starter at Right Back for Feyenoord Rotterdam this season.

The 21-year-old moved from Molde FK earlier this summer and will be looking to make an instant impact in the Eredivisie. Currently holding a SciSkill of 52.0, the Norwegian youngster is a relatively low-ranking player in the Feyenoord squad yet a Potential of 80.3 illustrates the development that we could see from him in the coming years.

Back in his homeland of Norway, the Right Back mainly played as an Inverted Wing Back or Wing Back in the Eliteserien. As a defender who is evidently keen to get on the front-foot, Pedersen could fit into the Feyenoord style of play very well and subsequently add value in his ball-carrying skills.

During the 2020 season in the Eliteserien, Pedersen performed well in Dribbling and Offensive Positioning – two areas that he will be looking to capitalise with in the Eredivisie this season."

Who is your Eredivisie OneToWatch?

Elayis Tavsan comes into the Dutch top flight this season off the back of an impressive 2020/21 campaign in the Keuken Kampioen Divisie.

The 20-year-old scored 11 times and assisted a further five as NEC Nijmegen were promoted to the Eredivisie. Not only that, but Tavsan’s Performance metrics show impressive output aside from just posting goal contributions.

As shown in the above graphic, the winger ranked as one of the best in the second division last season with particularly high performance in Dribbling and Finishing.

If he is to continue his development towards a projected Potential of 88.0, the 2021/22 campaign is likely to be a compelling one for Tavsan on a personal level. Undoubtedly a step up in competition, it will be interesting to track the development of such an impressive young player.

Kenneth Taylor looks set to play a role in the Ajax senior squad this season after an impressive campaign with the U21s in 2020/21.

Looking to build on the three appearances he made for the first team last season, Taylor will be hoping to prove his worth and continue his notable development. The 19-year-old mainly played as a Deep-Lying Playmaker in the Keuken Kampioen Divisie last season and registered 11 goal contributions in the process.

Taylor is likely to face fierce competition for a starting place in the Ajax side with Ryan Gravenberch and others coming off the back of a successful 2020/21 campaign. Nevertheless, the 19-year-old midfielder is likely to get a chance to prove himself this season. 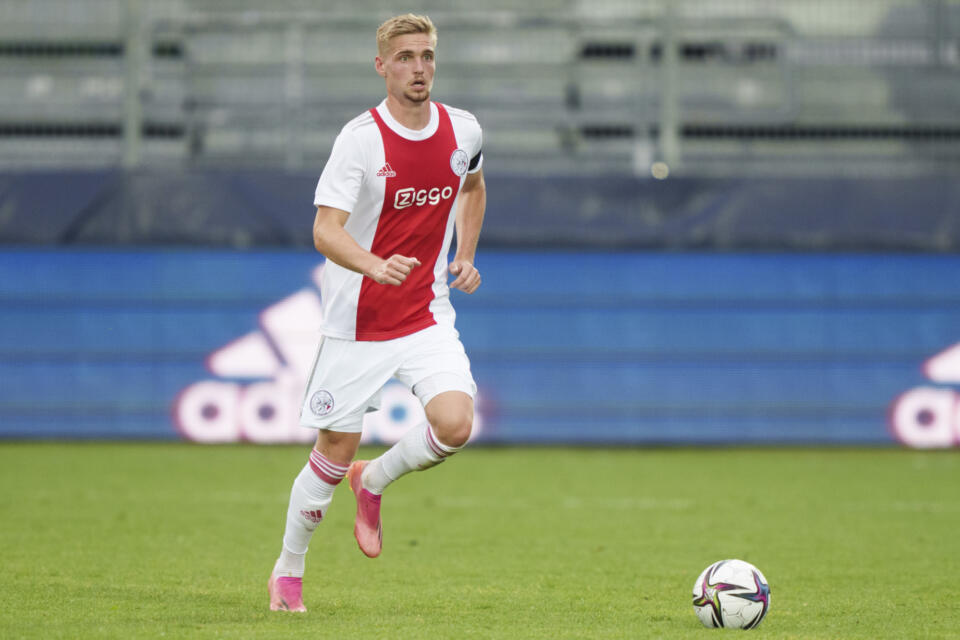 Formerly teammates of Taylor at Ajax U21 level, Quinten Timber looks set to have his first opportunity in the Eredivisie with FC Utrecht this season.

The 20-year-old also performed in the Keuken Kampioen Divisie last season and will be making a jump up to senior football with René Hake’s side. Utrecht finished in sixth position last season on 53 points – making it a sixth consecutive season finishing in the top six Eredivisie places.

For Timber, a versatile youngster who can play in a range of positions including Right Back and Centre Midfield, the focus is likely to be on earning game time and continuing his career development.

During the 2020/21 season, he ranked well amongst Full Backs in the second division with regards to Dribbling and Offensive positioning. Continuing to impress on the field can help him work towards his considerable Potential of 79.8.

Sam Kersten is likely to play another important role for PEC Zwolle this season. The 23-year-old made a total of 28 appearances last season, amassing 2,541 minutes played at Centre Back.

Mostly aligning as a Ball playing defender, Kersten tends to be heavily involved in short passes and low-tempo build-play in addition to operating in a high defensive line. The latter trait is well reflected in the defender’s high ranking in Recoveries from last season – as shown below.

This action group – including Tackle, Interception and Recovery in own third – goes to show his important contributions in key areas. With other high potential centre backs in the squad like Yuta Nakayama and Siemen Voet, Kersten will be looking to continue improving in the blue and white.

SC Heerenveen have a talent for picking up high potential loanees and Filip Stevanovic certainly fits the bill.

The 18-year-old winger, on loan from Manchester City, will embark on his third full season of senior football after two seasons in the Serbian Super Liga with FK Partizan Belgrade. That seems remarkable given the attacker’s young age but nevertheless shows why he is highly rated in terms of Potential.

As he transitions in Eredivisie football, it will be interesting to see how Stevanovic fares playing away from his native Serbia. Manchester City’s signing of his back in January certainly proves that he can become a top talent yet the coming season will be a big opportunity to develop in Europe.

At just 18 years old, Stevanovic may have picked the right destination in SC Heerenveen as a club who boasts a rich history in developing young talents.

Sam Beukema comes into the 2021/22 Eredivisie season off the back of an impressive display in the second division with Go Ahead Eagles last time out.

The 22-year-old’s summer move to AZ Alkmaar will be a notable step up both in quality and expectation but there is good reason to believe that he will prove a success. Currently boasting a Potential of 76.8, Beukema can become a Key Player for AZ Alkmaar in the next few years if he is to fully develop.

Furthermore, he ranked as the most valuable amongst all centre backs in the Keuken Kampioen Divisie last season – including strengths in Passing, Prevention and Passing. While the Eredivisie will be a step up in difficulty, he looks to be at exactly the right stage in his career to make that jump.

Alongside more experienced professionals like Bruno Martins Indi and Timo Letschert at the back, playing at AZ Alkmaar could be a highly valuable learning experience for the 22-year-old.

Devyne Rensch comes into this campaign after a fairly even split of games in the top two divisions during 2020/21 – making 11 starts in the Eredivisie and 12 in the Keuken Kampioen Divisie.

Now a permanent member of the Ajax senior squad, Rensch will be looking to nail down a starting position at Right Back. The 18-year-old has Noussair Mazraoui to contend with but will most likely earn an opportunity in what looks set to be a busy campaign for the reigning Eredivisie champions.

Over the last six months, including some valuable game time for the full-back, he developed in SciSkill by 22.7. This is largely thanks to direct involvement in the Eredivisie at such a young age but also due to the fact that he was contributing to a successful side. So much so that Rensch’s project SciSkill by the age of 25 years old stands at 107.2 right now.

If the youngster wants to continue making strides towards such a high projection of quality, game time in the Eredivisie will be vital towards that. After impressing in over 600 minutes of action last season, Ajax fans should be excited to see how Rensch develops over the 2021/22 campaign.

Next on the list is now-permanent FC Groningen signing Paulos Abraham.

The Swedish youngster played a bit-part on loan in the Eredivisie last season but will likely become more of a permanent fixture this time out. Having previously impressed in the Swedish top flight with AIK, it is clear to see that Groningen will be hoping for more of the same.

During his time in Sweden, Abraham played across multiple attacking positions including Centre Forward and Right Wing which is likely to give Danny Buijs’ side some tactical flexibility.

With a Potential of 95.0, Abraham will be looking to develop well over the 2021/22 campaign. Most importantly, added game time on the pitch will aid his career development. On a personal level, joining an Eredivisie club is likely to do just that with a good track record of producing young talents.

Noni Madueke’s achievements over the last year go to show why we should all be excited by another year of him in the Eredivisie.

The 19-year-old became a key part of an exciting PSV Eindhoven side, earned a call-up to England’s UEFA European Under-21 Championship squad and developed into an impressive performance on the pitch.

With the departure of Donyell Malen to Borussia Dortmund, Madueke is likely to become even more of an important asset this season as Roger Schmidt’s side look to dethrone Ajax from the top of the pile.

As shown in the snapshot below, Madueke’s SciSkill and Potential have both risen significantly over the last months, so much so that he is projected to become a top player by his peak age.

Who is your OneToWatch? Vote now! 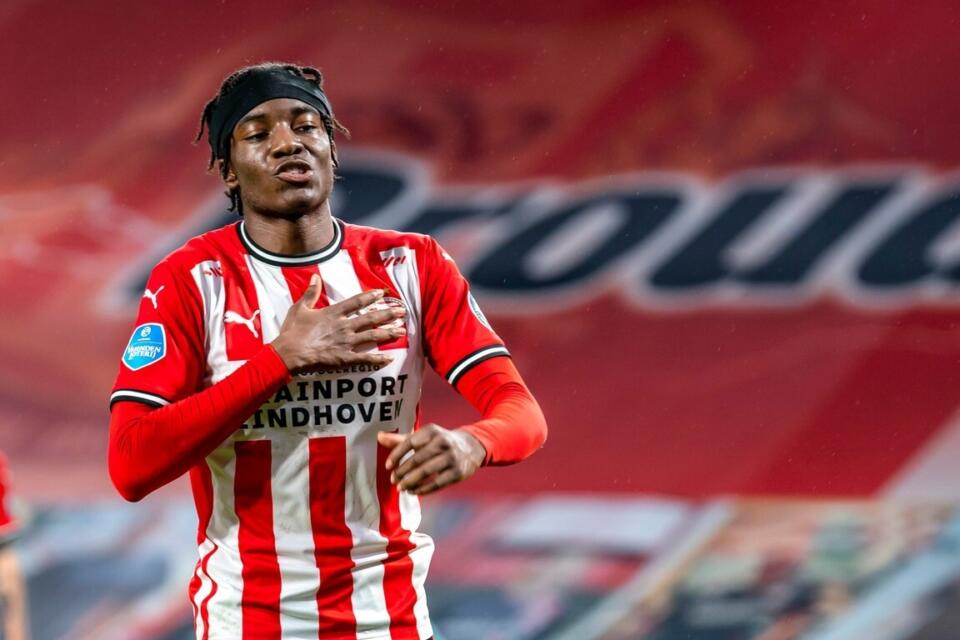