How is Real Madrid-owned wonderkid Martin Odegaard developing at Vitesse?

Almost four years have passed since Martin Odegaard made his first and only La Liga appearance to date for Real Madrid.

With 30 minutes left in the last game of a disastrous season, Carlo Ancelotti took the opportunity to flaunt the prize of the one contest the Spanish club managed to win at the expense of their European rivals in 2015.

The league title was already in Barcelona's hands, they had been eliminated from the Champions League semi-finals by Juventus and even their Copa del Rey campaign ended embarrassingly early.

In Odegaard, however, they had landed a golden talent who'd had the continent's best teams vying for his signature. After a long tour of Europe's top youth academies, he disappointed the likes of Manchester United, Liverpool, Bayern Munich and Ajax among others when he decided on a move to the Spanish capital.

Odegaard had made headlines at 15 when he became the youngest player and scorer in the Norwegian top-flight before then breaking the record as his country's youngest international. Four months after his arrival in Madrid, he set a record as the youngest to represent Real at 16 years and 157 days.

Inevitably, this meant that there were immediately lofty expectations on him to perform. On his debut against Getafe, the Santiago Bernabeu crowd rose to welcome him and clap off the star player he was replacing, Cristiano Ronaldo. 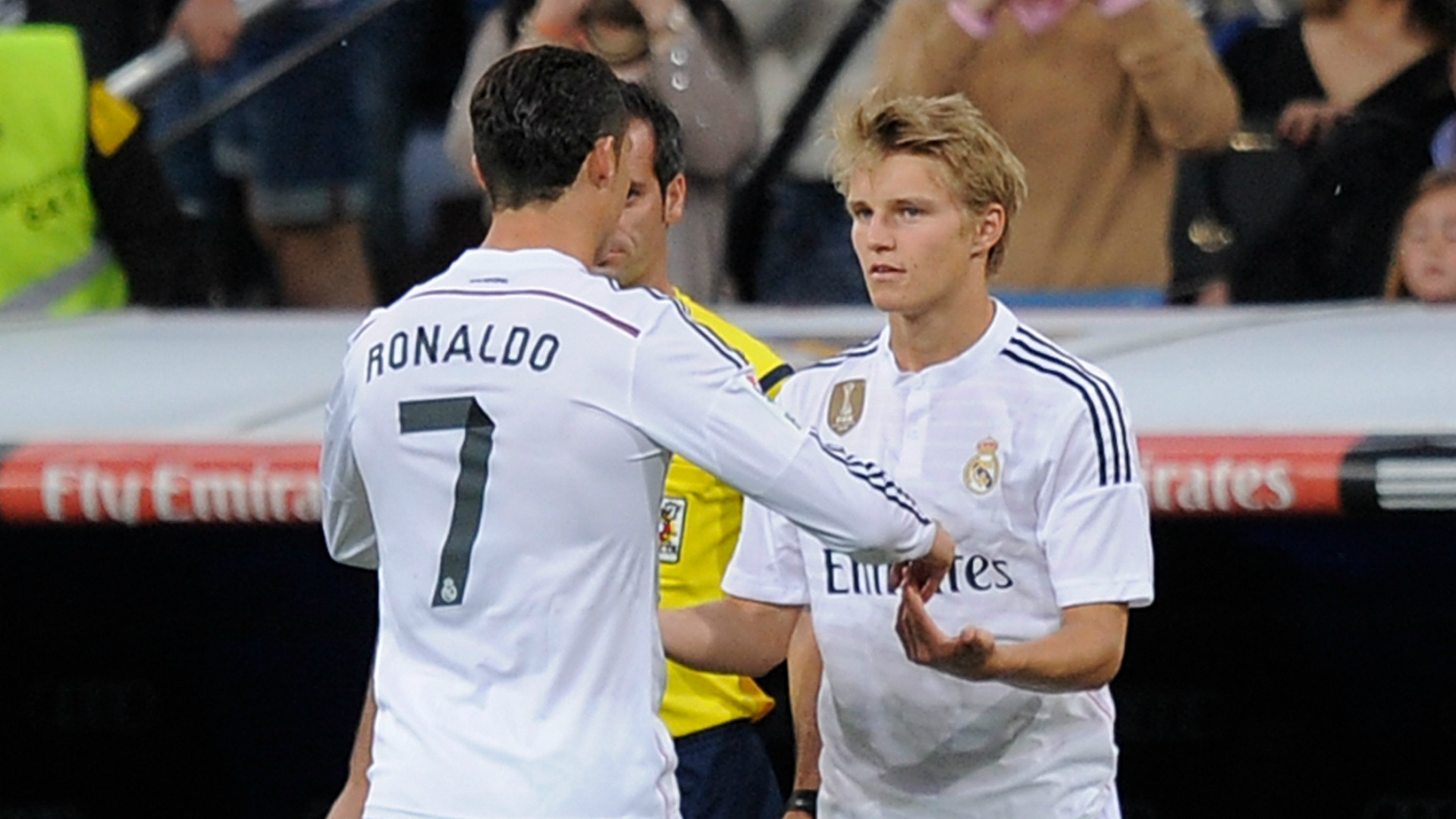 The Norwegian youngster described by Ancelotti as just a PR signing seems far away from fulfilling his dream and Madrid's early expectations.

But at the age of just 20 and currently starring in the Dutch top flight again at Vitesse - Odegaard is not giving up on reaching the very pinnacle of the game.

"It's not possible to predict anything in football, you just have to work hard and develop and in the end you see, he told Vitesse TV recently. But of course, I would like to go back to Madrid and play there. That is my goal."

He has been one of the Arnhem team's best players this season, lining up on the right wing to get seven goals and four assists in all competitions and help their challenge for a place in the Europa League.

The numbers give little indication he is ready to become an icon for one of the game's elite clubs, but Odegaard is clearly a gifted winger with a glittering future.

He was the star of the show again on Sunday as Vitesse came out on top against Emmen. As well as scoring from an audacious free-kick, he created several chances in an important 3-0 away victory. He had been crucial the previous week, too, when he made six key passes and scored one as they beat Willem II 3-2. In both games, Odegaard made more touches than any team-mate.

He has been used as an attacking midfielder occasionally, but Odegaard is at his best on the right wing. Leonid Slutsky's team recently switched to a 4-4-2, which demands a lot from the Norway international, but he is thriving.

Odegaard is constantly involved and eager to get on the ball. Always making himself available for a pass, he often drifts inside or drops back to help his team-mates and starts looking for a way to increase the pace of their attacks.

His excellent technique and quick feet give him an advantage over defenders as they scramble to stamp out the threat. Always calm and composed, the skilful player drives past opponents while searching for the best option. Whether he has space and time to think or is forced to move it on with one touch from a tight area, Odegaard's passes are imaginative and accurate.

The tendency for Eredivisie teams to build up from the back and through the wings has made it an ideal place for Odegaard to continue his development. The strengths he showed during his time at Stromsgodset and Real Madrid have been refined in Netherlands and he is becoming increasingly mature and bold on the field. He has scored two free-kick goals already this season, while his crosses have become more accurate and dangerous compared to his days with Heerenveen.

"Vitesse is absolutely not a step back, it is a step forward towards the top," he said. "I feel I have come to the perfect place to take the next step." 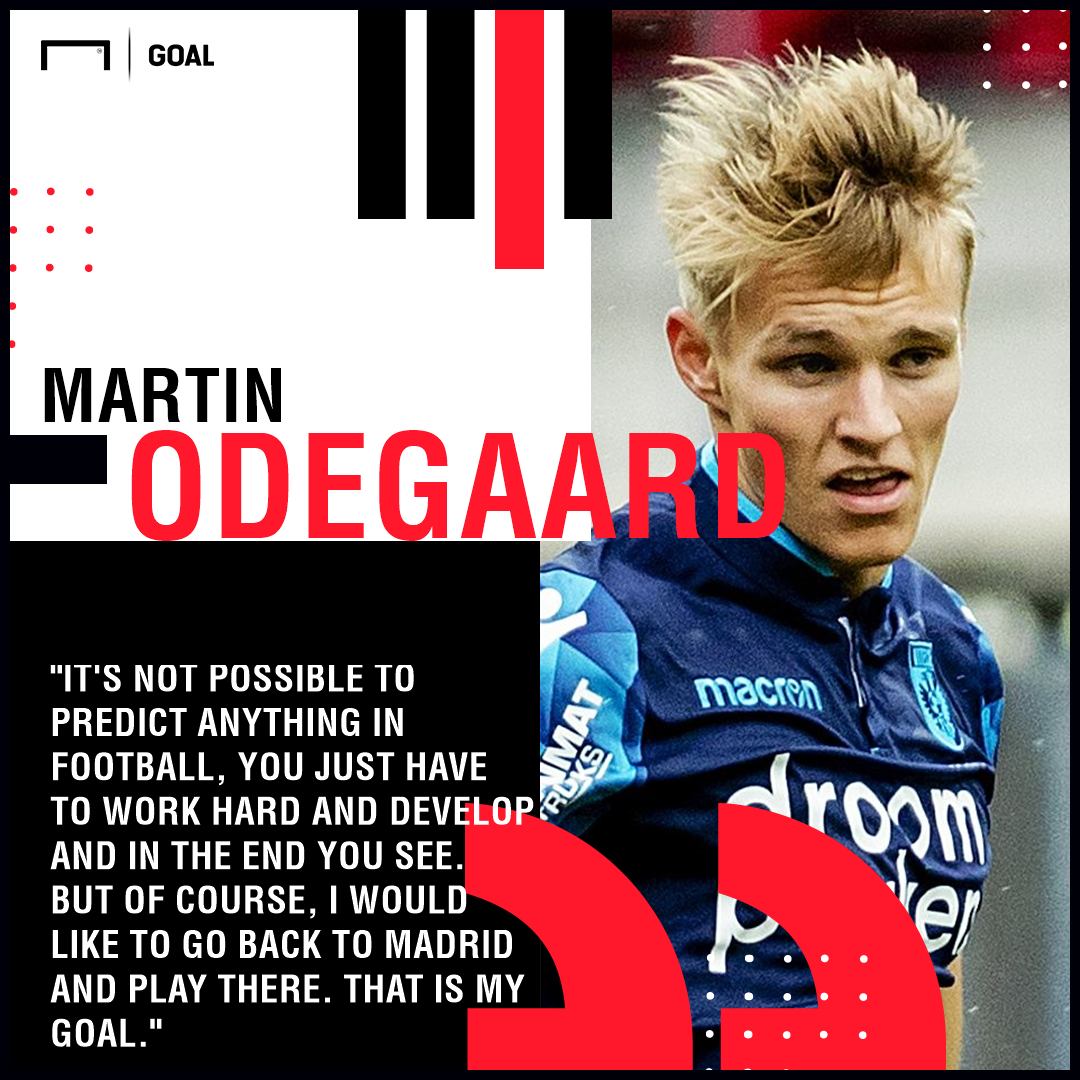 Although one of the most talented players in the Dutch top-flight, he needs to become the man who can take control of his team and dictate big games if he is to reach the predicted heights. Across his spells at Heerenveen and Vitesse, he has scored just one goal against Ajax and has been unable to make a mark on PSV or Europa League play-off challengers AZ, which will hardly impress the Madrid hierarchy.

Watching 21-year-old Ajax midfielder Frenkie de Jong's rise to prominence to seal a €75 million switch to Barcelona, Odegaard will feel a step from the Eredivisie to the top of La Liga is possible, but it is unclear if Madrid are convinced yet.

With over two years still to run on his contract, he still has time to prove he is worthy of a chance with the European champions. As impressive as he has been for Vitesse, there is a chance he will end up on loan again while they consider his future. They could be forced into making a more permanent decision, though, as Odegaard does not want to keep being sent to a different club every season.

Right now it has been nice, but it is clear that I want more stability over time. Then you must take an assessment of how to get it, he told Nettavisen.

I'm happy where I am. Then we'll see how the season was and hear the feedback from Madrid. If I don't get an opportunity there, then I have to find other ways.

After going to great lengths to lure Norway's esteemed prospect to the Spanish capital, Madrid will soon be faced with a difficult decision. But as their hunt for a permanent replacement for departed hero Ronaldo continues, they would be wrong to disregard Odegaard's chances of blossoming into the star they believed in just a few years ago.