GRAVENBERCH PROCLAIMED AS EREDIVISIE PLAYER OF THE MONTH

Orkun Kökçü is Eredivisie U21 Player of the Month

At the beginning of April, Ryan Gravenberch was named Player of the Month March by the Eredivisie. In March, the Ajax midfielder was the best-performing player according to the statistics and football fans’ votes. Orkun Kökçü has now been named U21 Player of the Month for the second time. With three players, Feyenoord has provided the most players for Team of the Month.

Ryan Gravenberch, from Ajax, has had a fantastic month. The Amsterdam team has qualified for the quarter finals of a European tournament for the third time in five years. The competition in the Eredivisie has also been pushed back: the lead on number two, PSV, has increased.

In all three matches against FC Groningen (3-1), PEC Zwolle (0-2) and ADO Den Haag (5-0), Gravenberch played for the full 90 minutes. The eighteen-year-old from Amsterdam made an impression in these three matches with his good passing skills: 149 passes on the opponent’s half, which is the most out of all Eredivisie players.

The debutant in the Dutch national team found the net after just 4 minutes and 56 seconds: the fastest Eredivisie goal against FC Groningen under coach Danny Buijs. This earned Gravenberch the title of Man of the Match.

With an assist against PEC Zwolle, Gravenberch was directly involved in eight goals this season (three goals and five assists). Only Duaan Tadi (thirteen) and Antony (eight) have been contributors to Ajax goals more times this season.

For Ryan Gravenberch, this is his first Player of the Month award. The 18-year-old midfielder is the ninth Ajax player to receive an Eredivisie trophy since selection began in August 2017.

In a volatile month for Feyenoord, with a big win over VVV-Venlo (6-0) and draws against PSV (1-1) and FC Emmen (1-1), Orkun Kökçü had the best statistical score of all under-21 players. In March, the midfielder shot most often (nine times) towards the goal from outside of the penalty area. This seems to be the Turkish international’s weapon: Kökçü scored five of his seven Eredivisie goals from outside of the penalty area, including his goal against FC Emmen.

Although the midfielder is not yet known for his scoring ability, the number 23 is on the offensive. In his last three Eredivisie matches at De Kuip, he was directly involved in three goals (two goals and one assist), which is more than in his first 20 home games (one goal and one assist). In March, only Berghuis (25) was directly involved in more attempts at goal made by Feyenoord than Kökçü (16): ten shots at goal and six chances created.

This has resulted in the Feyenoord midfielder’s second U21 Player of the Month award. Kökçü previously won the award in December 2019. 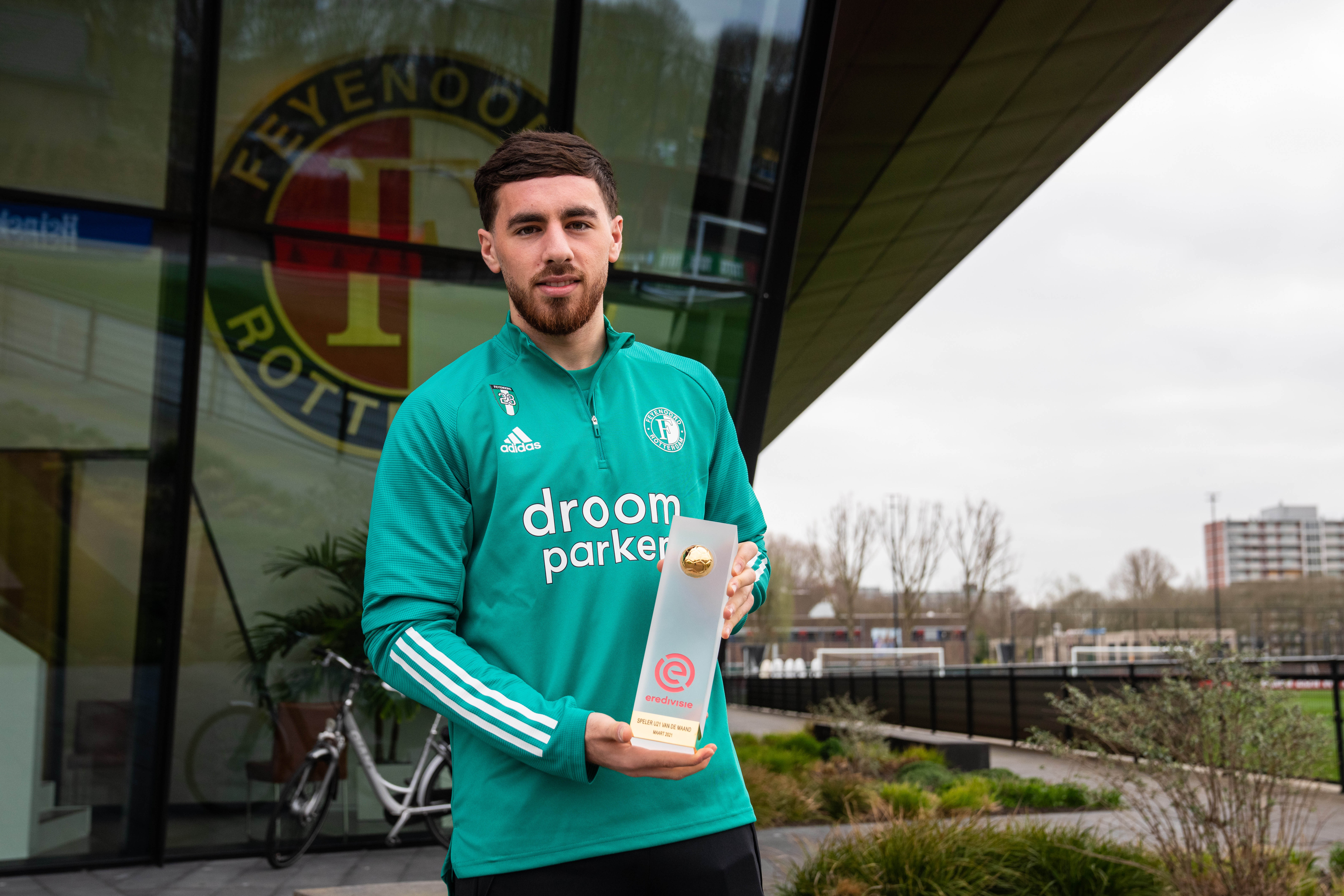 Orkun Kökçü with his second U21 Player of the Month award. Photo: Feyenoord.

Feyenoord provides most players for Team of the Month

With three players, Feyenoord has provided the most players for Team of the Month. Besides Kökçü, Botteghin and Marsman have also earned a place in the team. Frontrunner Ajax follows with two players (Gravenberch and Neres), as do Sparta Rotterdam (Beugelsdijk and Duarte), who have also had a good month thanks to a catch-up game against VVV-Venlo (0-1 win), a victory over RKC (2-0) and two draws (1-1 against both FC Emmen and Heracles Almelo).

The Team of the Month is created using statistics and fans’ votes.

As in previous months, the scores for Player of the Month are drawn up for players objectively based on over 60 statistics. Only players who have played at least two-thirds of the total number of game minutes are eligible for the prize. Something that has changed since January, however, is that fans’ votes submitted through the Man of the Match selection are also included in the count.

The Eredivisie Player of the Month award is an initiative of Eredivisie CV in collaboration with ESPN and KPN, main sponsor of the Eredivisie.