BRUMA NAMED EREDIVISIE PLAYER OF THE MONTH, ALI AKMAN RECEIVES FIRST OFFICIAL JOHAN CRUYFF TALENT OF THE MONTH AWARD AND XI OF OF THE MONTH

Armindo Tué Na Bangna, better known as Bruma, has been named Eredivisie Player of the Month for August. The 26-year-old attacking midfielder from PSV won the award for the first time. N.E.C. striker Ali Akman has received the first official Johan Cruyff Talent of the Month award. Ajax is the biggest supplier to the Eredivisie Team of the Month, providing three players.

Armindo Bruma is enjoying a flying start to the season and has regained the confidence of PSV coach Roger Schmidt for the time being. The nine-time Portuguese international was given a starting position in the first two Premier League games against Heracles Almelo (0-2) and SC Cambuur (4-1), while he played the last ten minutes in the third win over FC Groningen (5-2).

The striker, who was positioned as an attacking midfielder in Schmidt's 4-2-3-1 set-up, played an important part in PSV's unbeaten status and came out statistically strong. On behalf of PSV, Bruma was responsible for most shots (10) and most chances created (8). Only one player was involved in more chances in the Eredivisie than Bruma (Dusan Tadić 19 and Bruma 18), one player completed more dribbles (Noni Madueke 8 and Bruma 7) and no PSV player made more passes in the opponent's half than the Portuguese (84). The striker last scored on 21 December 2019, against PEC Zwolle (4-1), followed by nine matches without goals or assists. This season, the tide seems to have turned: Bruma was involved in a PSV goal in the first three games (2 goals and 1 assist). In the home win over SC Cambuur, he was voted Man of the Match. It is Bruma's first Eredivisie Player of the Month award and he is the sixth PSV player to receive it. On the last two occasions, Donyell Malen (September 2019 and February 2021) won the monthly award on behalf of the Eindhoven side. In the August vote, Bruma managed to stay ahead of Dusan Tadić (Ajax) and Michiel Kramer (RKC Waalwijk). 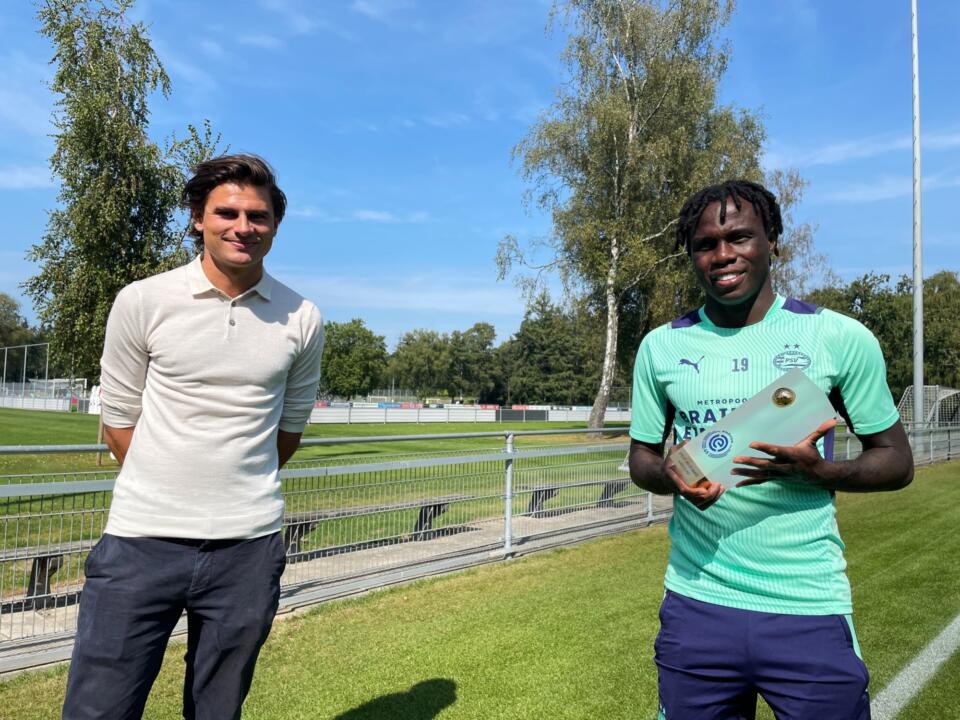 A single award for talent in the Eredivisie

Ali Akman is the first winner of the Johan Cruyff Talent of the Month. The 19-year-old Turkish youth international, who is on loan to N.E.C. Nijmegen, from Eintracht Frankfurt, made his Eredivisie début as a substitute in the lost away match against Ajax (5-0). In the next two rounds, Akman started as a main player for the Nijmegen side and immediately managed to get himself into the spotlight.

With a goal after three minutes against PEC Zwolle (2-0 win) and the winning goal in Almelo (0-1 win), he is the third-youngest player to score in two Eredivisie matches in a row for N.E.C. This showcases his effectiveness: he made five goal attempts in August, four of which were between the posts and thus scored two goals. In addition to a place in the left row of the Eredivisie, Akman was twice voted Man of the Match.

It is the first monthly award for both Ali Akman and an N.E.C. Nijmegen player. 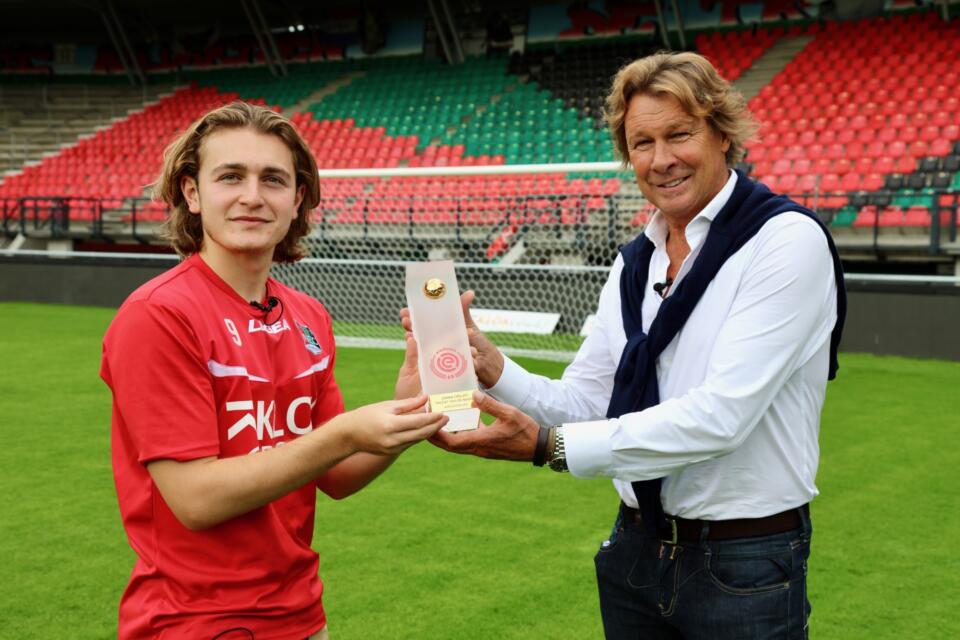 Ajax provides most players for the Team of the Month

Ajax provides most players for the Eredivisie Team of the Month with three players (Blind, Mazraoui and Tadić), Feyenoord follows with two players (Kökçü and Linssen). Besides the monthly winners, Wellenreuther (Willem II), Willem Janssen (FC Utrecht), Mats Seuntjens (Fortuna Sittard) and Michiel Kramer (RKC Waalwijk) complete the Eredivisie Team of the Month. The number of attacking players is striking this month: for that reason, a 3-3-4 line-up has been chosen. 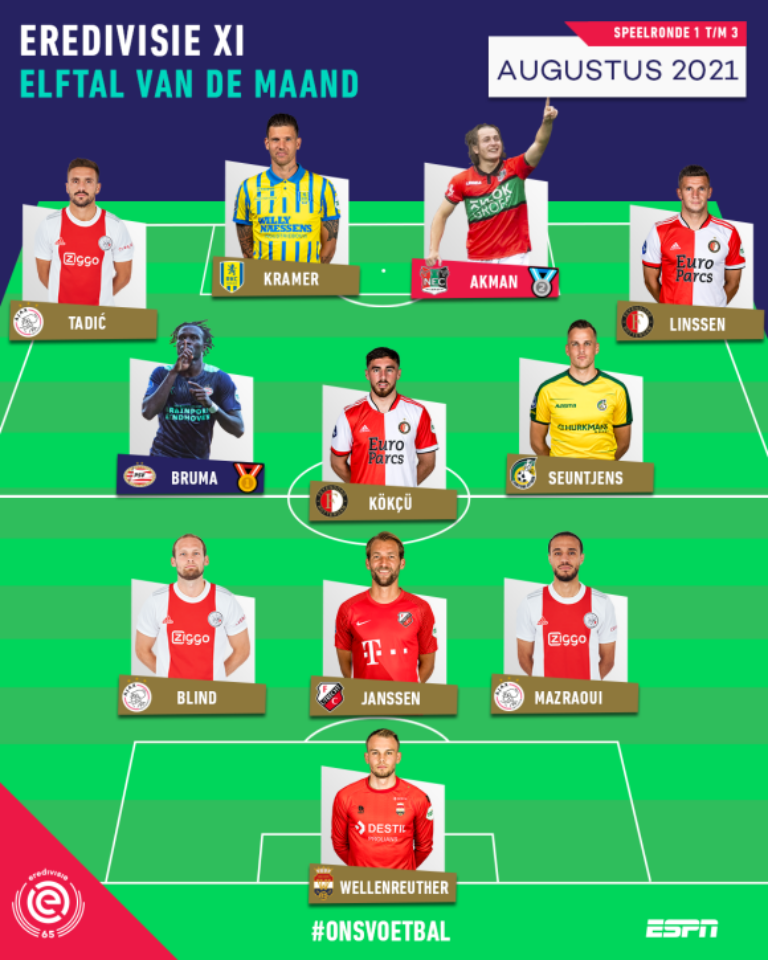 Since this year, the Eredivisie also keeps a Fair Play ranking. The ranking is formed on the basis of competition dates. For each club, the number of defensive actions (tackles, sliding tackles, obstructions, etc.) is related to the number of fouls recorded. The club that scores best occupies the position at the top of the ranking. Sc Heerenveen is currently top of the Eredivisie Fair Play ranking, followed by Go Ahead Eagles and SC Cambuur.