16 May 2019
The midfielder is bound for Camp Nou this summer and, despite this season's successes, he is looking forward to the next opportunity

Frenkie de Jong says he will look back fondly at his time at Ajax after securing the Eredivisie title on Wednesday, but the midfielder says he has no regrets about leaving as he prepares for his big-money move to Barcelona.

The Netherlands midfielder is set to join the Spanish giants this summer, having completed the €75 million (£65m/$85m) move earlier this year.

It seems likely he will be joined by team-mate Matthijs de Ligt as Barca are closing in on a move for the defender, while players like Hakim Ziyech, Donny van de Beek and David Neres could also move on this summer.

Before that, though, the club sealed the league title, beating De Graafschap 4-1 to edge PSV to top spot and claim a domestic double.

"I have no regrets, but it's a pity. I think we have a unique team this season, for Dutch standards," he told Fox Sports.

"We had a lot of fun and we experienced some great moments together. It's obvious that I'm going to miss that.

"The greatest pleasure is that we have a lot of good footballers together. Then it's just great to play and I think it also fits our style of playing. That's what I enjoy the most. I will miss the Eredivisie, I had a great time here. Not very long, but it was nice."

While leaving behind a talented group of players, one of the selling points when considering a move to Barcelona is the prospect of playing alongside Lionel Messi.

And De Jong admited his excitement at linking up with the five-time Ballon d'Or winner in Catalunya, joking his main aim will be to make sure the mecurial Argentine sees as much of the ball as possible.

"It would be fantastic to have a click with him," he said. "I just have to pass the ball to him many times!"

Having won two trophies this season, Ajax could have had a chance at a treble as they marched past Juventus and Real Madrid into the Champions League semi-finals.

But, following a 1-0 first leg win in north London, the Dutch side wer shocked by Tottenham in a 3-2 home loss that saw them knocked out on away goals.

Still, the season has been viewed as one of the most memorable in the club's recent history, and captain De Ligt believes the club has plenty to be proud of as they lifted the Eredivisie title for the first time since 2014. 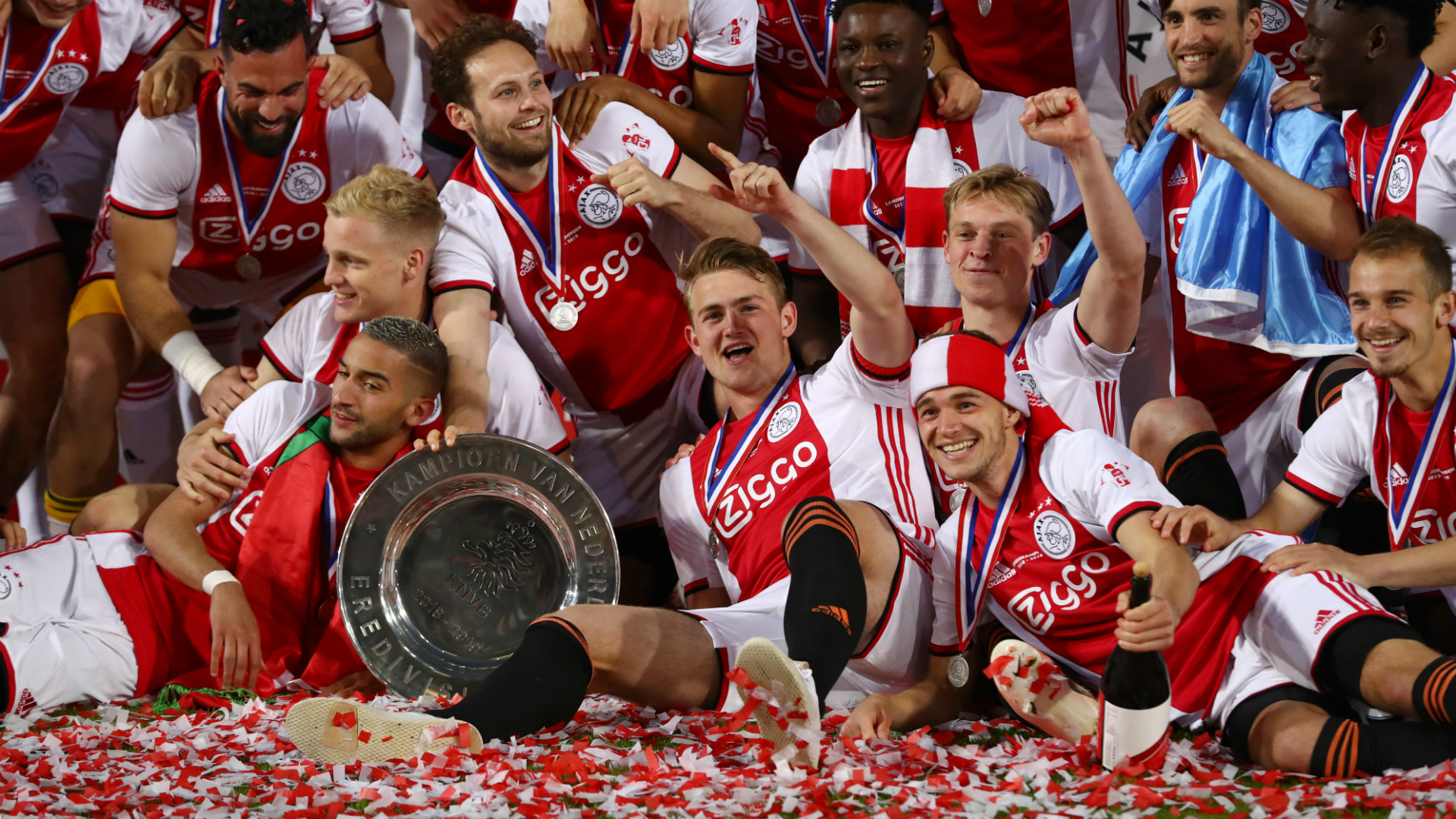 "It's unbelievable. This is the title we've been craving for so long, for five years. After a season like this, it's really amazing," he told Fox Sports.

"I enjoyed everything: the cup run, this Eredivisie season and the Champions League of course. But what I enjoyed the most, is this team feeling that we have.

"We are just a couple of friends and we play football together as if we're playing in the schoolyard. That's amazing to see.

"We've been everywhere together: Lisbon, London, everywhere. And everywhere you're stuck with each other and you create a bond. This is such an incredible team.

"At the start of the season, the first thing we wanted was to win the league title. The rest would be a bonus.

"Of course it's a shame how we were knocked out by Tottenham Hotspur, but right now the feeling of pride is dominant. We reached the Champions League semi-finals and we won the double, so we can say it was a very good season."